Year 2 children had a very exciting time competing against each other in a rugby competition at the end of this term. Each class entered a team of 8 children and Mrs Richards acted as referee while Miss Palmer was the official photographer. The matches were all closely contested with every child using the skills that had been taught in lessons and showing how keen they were to score a try. Star players included Eoin and Teddie as well as Joseph who all flew across the hall to score amazing tries. Class 9 were the overall winners so congratulations go to them - Miss Palmer is very proud!

This year the year one classes learnt and practised a range of sequences and routines as part of their weekly PE gymnastic lessons. This involved travelling, rolling and jumping in different ways on both the floor and on the apparatus. Several children showed great competence so the teachers held a simple competition to encourage them to challenge themselves to achieve their best performances. One child from each class was chosen as the outstanding winner but it was too difficult to nominate one overall champion so all three girls were awarded outstanding performance certificates.  Congratulations to Year 1 for being so brilliant at gymnastics! 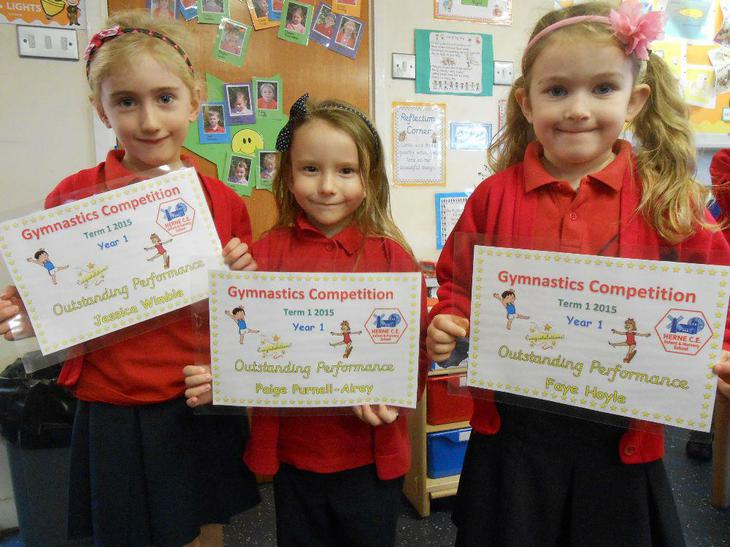 KS1 Wake Up and Shake Up Competition - 22nd January

Although this competition was delayed from Term 2 it was well worth the wait. The six classes performed outstanding routines in front of our three judges and Reception audience. Office staff and the deputy head were also seen to be jigging along to the beat.  The standard of the dancing has become higher and higher each year so the judges found it very difficult to find winners. Dancers displayed great rhythm, collaboration, timing and varying routines to the 1950s music.  After much deliberation Classes 4 and 8 were declared the winners from each year group. Congratulations to those children and well done to everyone - the routines are now on our shared system for all to copy and enjoy.

Mr Taylor volunteered to referee the Year 2 competition which was hotly contested between two mixed teams made up of children from all three classes. The match was exciting to say the least and Mr Taylor needed all his physical skills to keep up with the children as they ran from one end of the pitch to the other. The overall score was a draw so both teams returned to class triumphant! In all the excitement the official photographer forgot to record the event! However, from the players of this competition we were able to select our two dream teams to take to the HBH Partnership competition at UKC. Well done to Year 2

This has become a much anticipated competition and this year was the best yet! Each year group chose a theme to base their dance on and performed in front of our judging panel; Mrs Jenkins and Mrs Steele from HBH School and our very own Mr Havell who is now an experienced dance judge. Foundation Stage chose Space and we saw three wonderful dances with the children wearing the BIGGEST smiles as they performed. Year 1 chose an eclectic mix of street songs about towns and learned some complicated routines which they performed faultlessly and with high energy. Year 2 took a more traditional stance with national dances from England, Ireland and Wales which again required much practise of tricky routines. Feedback from the judges included words such as WOW! And FAB! As well as ‘great formations’ ‘complicated’ ‘high energy’’ great timing’. The judges took a long time to decide the winner from each year group and such was the standard that the whole school performed again in front of each other before Classes 2, 6 and 8 were declared overall champions for this year. Congratulations to the children from every class and a huge well done to the staff who enjoyed this as much as the children.

This is one of the most successful years we have had for fun, energy and participation for all. Each year group planned a carousel of sporting challenges with a competitive element which the children enjoyed in teams of 10. Spectators were once again encouraged and coerced to be active participants with many taking the sports very seriously! Congratulations to everyone from Nursery to Year 2 for showcasing the sporting excellence at Herne.

All original images and photographs displayed on this page may be subject to copyright. Except as otherwise expressly permitted under copyright law, you may not copy, reproduce, republish, download, post, broadcast or transmit in any way, any image without obtaining the permission of the site owner or copyright owner.
Top
Cookie information
Cookie Notice