For this first event of the season we were very well represented by our seven Year R and Nursery runners. Miles came a very impressive 2nd in the reception race  - well done. Every child ran incredibly well over the 600m course which was not just along the flat grass but over hilly terrain being led by an adult runner who set the pace. Even though the host school entrants clearly had an advantage, we were able to hold our ground with Felix in Year 1 achieving a respectable 8th place. We are also incredibly proud of Kayleigh who was our only Year 2 entrant - she was very brave to face the experienced runners from Kent College and surrounding schools.

Disappointingly, both of these competitions had to be postponed on the day due to poor weather conditions. Our children were ready to go and had been preparing in advance. However, we are hoping that Term 2 will see us enjoying the fun of meeting other schools for both cross country and rugby.

Twelve of our Year 2 children travelled by mini-bus to Graveney school for a Kurling completion on 6th November.  It was very exciting to visit another school, especially in a rural area but quite different to our own. We all made new friends, had a lot of fun and enjoyed exploring the facilities of a much smaller setting. The children were very well behaved and as always were a credit to our school.

Everyone played with great control and skill. Thomas and Evie in particular were outstanding players who always scored points in their games. The overall result was a massive 49 points to Herne Infants and 21 points to Graveney. Well done and enormous congratulations.

In stark contrast, the adult competition was a very close match with Graveney just beating Herne Infants by one point. There may have been some alterative techniques being demonstrated but the adults had just as much fun. We look forward to a return match.

Wake up and Shake Up Inter-School competition

This took place on Weds 2nd December at Boughton Village Hall which was a great venue for the event as all the children seemed to thoroughly enjoy the opportunity to perform their routines on a real stage!  The quality of the routines was fantastic and, after some tricky deliberation by the judges, the final results were revealed. Herne Infants won for the third time in a row – in fact we have won this competition every year since it began! Congratulations to Mrs Fordyce for one of her amazing routines and a huge well done to the children who were brilliant on the day. Highlights include our 10 children leading the whole audience for their routine as a finale and Noah wearing his medal to bed that night.

Although the children have been practising with Mrs Beach for only a few weeks during the after school club and regrettably the rules stated that we were only allowed to take 8 of them, the teams had a wonderful time at Hampton Primary School. During the afternoon they all increased their skills enormously with one team going on to achieve 4th place and another 9th place out of a total of 16 which is a significant achievement. Several children were positively beaming with excitement at the whole experience. Congratulations also go to Mrs Beach and Mrs Belle for supporting the children so brilliantly.

All the children in Year 2 have been learning and practising the tricky Key Steps Gym routines during curriculum time. It was a very difficult decision to take only the allowed three teams of 4 children to the HBH gymnastics competition. However, those children lucky enough to be chosen were a real credit to the school and each one performed the routines to the best of their ability despite performance nerves and excitement. The Arena is a huge hall and can be very daunting for small children especially as they had to perform all three elements in front of serious faced judges. Well done to all the children and congratulations to the teams who were placed 2nd,  5th and 7th this year out of 14 teams! An amazing result and credit to the whole school for allowing the children to make such fabulous progression in gymnastics. It means that we will once again be able to represent the Herne Bay Partnership at the finals of the Kent School Games in Maidstone in June.

Our team from Year 2 made the journey to the University of Kent sports hall with Mrs Richards in charge. The warm up drills and games were followed by a morning of games. Our children played so enthusiastically against the 12 other local primary schools. Every child in the team played brilliantly, getting progressively better and winning each game! The final was so exciting that Mrs Richards nearly lost her voice from cheering so much. CONGRATULATIONS on winning the whole competition!

Ten children from Year 2 competed against 16 other KS1 teams at Herne Bay High School. Everyone took part in several games including an obstacle course, bowling, speed jumping, relay and long distance throwing. Our children tried their very best at each station and came away feeling very proud of themselves for gaining 2nd place and silver medals.

Mrs Fordyce and Miss Winthrop were delighted to take this year’s dance troupe to the Theatre at HBH School to perform their wonderful dance to Slap Bang Wallop from Chitty Chitty Bang Bang. They performed alongside many other Primary schools from the local area. Parents agreed that the children were amazing and once again proved how extraordinary our dance standards are at Herne. Without the fabulous support from the HBH dance department this event would not be possible so we are very grateful to them for organising this annual event so that many children have the opportunity to perform in front of an audience who otherwise would never be able to. Thanks also to Mrs Fordyce for supporting us with the choreography.

Once again we were invited to take part in an open athletics competition in Canterbury.  One of our biggest turn-outs yet saw 8 children from Nursery to Year 2 enjoying the fun and competition offered by Kent College. Well done to all those who took part; we know how much you enjoyed the morning and how hard you ran and jumped in all the events. The photograph of Chloe demonstrates how much you loved the opportunity to participate with other schools in such a beautiful setting.

Thank you very much to all the parents who gave up their time to allow the children to compete. 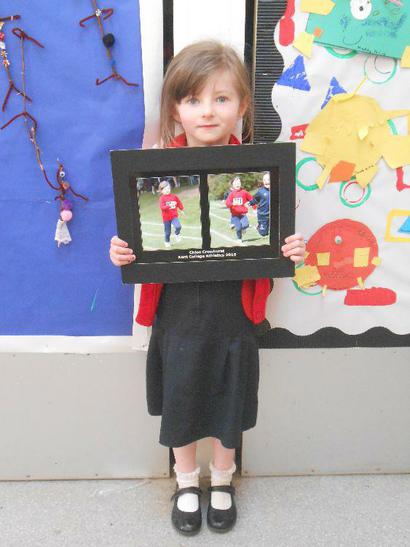 Mr Taylor and Miss Ingram took our 2 teams of 14 very excited children to UKC to play in the HBH Partnership competition. Our children had a wonderful time in lovely warm sunshine playing against some exceptionally talented teams - 18 in total. Our team played their very best and managed to score several great goals as well as perform some skilful tackling. Each team came 3rd in their respective heats which was a brilliant result and we were very proud of them all. However, the other players just succeeded in winning more matches than us so we returned to school a little weary but happy that we had been a part of the competition. Well done to the teams and to Mr Taylor who became head coach for the morning

For the last competition at Kent College this year the morning dawned dry at least. Emma and Charlie represented the school for KS1 while Luke and William were our ambassadors for Foundation. They all did a brilliant job attempting the sections of the competition and had a lot of fun too. Thank you once again to the parents for being so supportive. 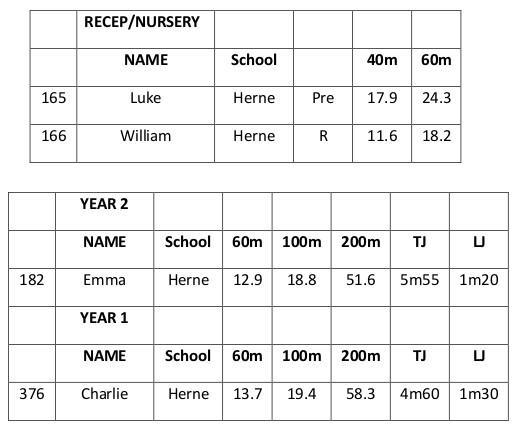 Having earned a place in the final, our four members of the team practised the three different routines at home and school. They were very excited to be travelling by minibus all the way to Tovil near Maidstone to compete with teams from all over Kent.  Once there they had one final practise on the huge bouncy mats before performing each routine in front of the judges.  Every child performed at their very best with great poise and accuracy. We were extremely proud of them.

Two days later the results came and we discovered that our team had come 4th by only 3/100ths of a point! Congratulations and well done to each child.

This year our Herne Dance Troupe were truly wonderful – bringing the audience to their feet for each of their performances. Their commitment, talent and skill was amazing and after all the immense amount of practise combined with tremendous support from everyone involved we felt it was a true reflection of the outstanding level of dance at our school. An enormous thank you and congratulations to the children and staff.

We were fortunate enough to be able to take two teams from Year 1 to this fabulous day organised in partnership by HBH School and Kent Sport. Many children who have not been able to participate in our clubs this year were chosen to give them an opportunity to experience the excitement of representing their school. The morning session involved outdoor sports such as football, rugby and athletics which were all run by local club coaches who had given up their time to support the day. After lunch the children had a bouncy afternoon in The Arena with an enormous bouncy mountain as well as other bouncing activities. All the children had a lovely day and came away feeling very happy.

All original images and photographs displayed on this page may be subject to copyright. Except as otherwise expressly permitted under copyright law, you may not copy, reproduce, republish, download, post, broadcast or transmit in any way, any image without obtaining the permission of the site owner or copyright owner.
Top
Cookie information
Cookie Notice